excerpted from Time To Lead (available on Amazon.com)

Radical action causes us to look for new anchors.

II Kings 18:4: He (Hezekiah) removed the high places, and broke the images, and cut down the groves, and broke in pieces the brazen serpent that Moses had made (during a time of destruction as a focal point): for in those days the children of Israel burned incense to it (turned the one use object into a sort of a god): and he called it Nehushtan (piece of brass).

“Our lives begin to end the day we become silent about things that matter.” — Martin Luther King, Jr.

Base Living:Human nature leans toward base living. As much as we would like to complement our humanity, it simply will decay into animalistic expression left unchecked. Values and character are built over time and circumstance. Truth, honesty, courage, and compassion in a community do not come from standing on the corner and watching. They come from purposeful and determined action of many individuals over time.

Urgency: Hezekiah in his young heart knew action had to be taken. He sensed the urgency of the moment and moved off of the sidewalk of people watching. Hezekiah seized the day throughout his life. At this trend-setting juncture, he established a position of “no retreat” by tearing out the places to which people could retreat.

Disequilibrium: Creating disequilibrium for those caught in a vacuum of disillusionment and distortion of vision can be a necessity. When wanting to move forward into new territory, it is many times absolutely necessary to take away reminders of a destructive past. Radical action causes us to look for new anchors. Even a good thing in the brass serpent, which God meant for good when it was created, can become an evil reminder and a draw backwards instead of forward.

Hezekiah broke off old relationships that pointed the wrong direction in establishing and living in greatness before God with the people.

Ugandan Change Agent: Ugandan President Yoweri Museveni stood against the curve. After discovering a third of his army officers were HIV positive, he determined to make a stand. The President started a hard and loud program focusing on faithfulness and sexual purity. It was against the cultural curve. The nation had a culture of free sexual activity with multiple partners. He called for cultural change as an answer. The results were astounding. HIV percentages dropped 15% over a decade.

There have been many detractors to his actions. But he took them. He stood against the curve and called for a break with old relationships at a national and individual level.

Respond with Action: What symbols of antiquity cause your vision to look backwards? What about the people with whom you partner? What ideas are anchored in the past but not the future? What keeps character tied to a post?

Pray with Faith: These are challenging words, Lord of Life. You have plans for me to succeed and prosper in all I do. You have focus on my future. There are many around me waiting on my action. Deliver me from the death of apathy. Deliver me from the shroud of inaction. Cause me to come to Your fresh and living waters. Cause me to see those obstacles that bind me and those around me to the past. Birth this greatness in me, Father. I commit to see life in a new light. Help me to purge the distractions that draw me backwards.

excerpted from Time To Lead: Steps To Transformation For Those and Those You Lead 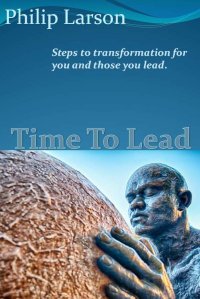 Leaders are able to reroute their path to meet core vision and objective.

II Kings 18: 5: He trusted in the LORD God of Israel; so that after him was none like him among all the kings of Judah, nor any that were before him.

“Preach the gospel at all times and when necessary use words.” St. Francis of Assisi

Trust In God: Our speaking platforms and writings resound with lessons on leadership and change based on the lives and teachings of Genghis Khan, Rollo May, Marcus Aurelius, William James, Winston Churchill, Confucius, Sun Tzu, humanism, capitalism, IBM, Jack Welch, Lee Iacocca, and the Marriott’s. Here is a man, who in his youth established a testimony of trust in God greater than David, Solomon, and all the other recorded world rulers of the day. Here is a man, who with little resource, pulled off the greatest upset against the giant of his day. His strongest resource was trust of God.

Common Creation: Hezekiah is a man like us. Young, ambitious, and filled with a life of bad examples, he chose to set a different path. In his later years, when he waned in trust in God and began to lean on himself and his strengths, he revived himself to former levels. Through a commitment to God, greatness oozed from him beyond what he had experienced early in ruling. Again, he saw great action of God on his behalf.

Cultural Imperatives: Our nation of the United States is under testing. Other nations have similar challenges. There is nothing new about the tests before us. Trials come in waves over the centuries. Equality is always questioned by some group and requires a constant adjustment as a nation of ever new citizens grows. Racial barriers rise in differing manners, but they will never totally subside. Poverty will always be with us and require constant adjustment and compassion to address. Distribution of wealth through taxation and business legal edicts will never be resolved to everyone’s satisfaction. Governance issues of when and how much to restrict use of common resources and contain greed through legislative restraint remain. Freedoms of speech, religion, and self-assertion need protecting.

How we act today as states and nations leaves the next generation a different set of symptoms of problems than ours. The issues are the same at the core. Leadership cannot rest once an issue is significantly addressed. Leadership is required for continuance of peace and community stability and economic prosperity. Hezekiah had been left with pain and bad example. He left a better line to follow.

Overcoming Bad Example: One of the strongest impacts in the last century in the United States came from Ronald Reagan. Through political and personal activity in California and as President of the United States, Reagan influenced the way people think and relate. His examples as a child were contradictory.

During times of change economically and in global duress, Reagan provided a leadership on which the nation depended. Dependability and responsibility in his life and example impacted those who agreed with him and those that did not.

Many leaders have bad example in their early life. It serves as an incentive and passion to live a different way. Every action we take is not always right. However, actions that bring hope and healing for others out of our own pain can make a big difference. Many of our leaders of all political parties and cultural heritage have acted out of their history and commonality with struggles to influence our nation.

Pray with Faith: Father, pull from our heritage goodness. Yes, You placed goodness in our heritage from which we can grow. There is a path in our past meant to be stronger. Help us to sort through the bad and find the good. Help us to pass forward a world stronger and better than the one we inherited.

Purchase your copy on Amazon print or kindle and study through insights from 54 world changers in business, community, government, education and life.  History has good repeatable lessons.  http://amzn.com/1497525039

Make a dent in another family.  Give $20 to Community Transformation Initiative and feel good about yourself.  Lay up some treasure in a better life forward.  Use Paypal or Click on your favorite credit card.  Secure. Tax Deductible.  Solid Investment.